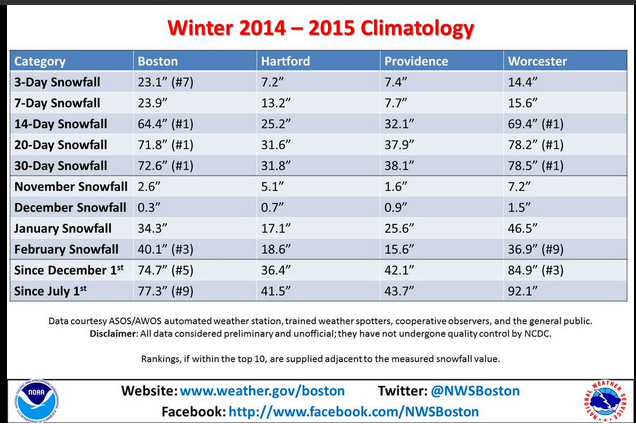 Tomorrow is the three year anniversary of the record breaking 45 days.  Three years ago on January 27, 2015, started the span of 45 days where we had record breaking cold and record breaking snow.  What was unique about that winter was the fact that these records were broken only within a little over a month.  By the end of February, snow was being measured in feet, not inches.  The total amount of snow that winter recorded in Boston was 110.6 inches.  The previous record was 107.6 inches from the 1995-96 winter.  Most of this snow came during this period of time.

A total of 68 inches of snow was recorded in Boston in the month of February alone which was the snowiest month on record for Boston which is significant considering the average snowfall in Boston for the entire winter is 43 inches.  Boston ended up breaking every snow record except for the 1,2, and 3 day snowfall records, but the fact that so much snow fell in such a short period of time, it was really bad.

There is something called an L-score which scores a winter out of 10.  A score of zero basically means that there was no snow that winter and a 10 is the absolute worse winter possible.  The winter of 2015 ranked a 10.  In perspective the winter of 1978 scored a 7.1/10.  Bangor Maine and Syracuse New York scored 8.4 and 7.4 respectively where both locations got more snow than Boston but because Boston’s snow came in such a short period of time, it had a worse score.

These storms are of particular note from that winter.  The first storm of the winter was on January 27, which brought 24.6 inches of snow.

A storm that was overlooked because it came after the Patriots won the Super bowl was on February 2 where Boston again got well over a foot again.

On March 15, Boston didn’t get as much snow as it did for most of the season but that was when Boston broke the all time snowfall record.

The temperatures were not as big a deal as the snow that winter, but it was a big reason for why we got so much snow.  There was a stretch of 39 days in January and February where the temperature did not get above 39 degrees.  Therefore because it was so cold, the snow could not melt very quickly which meant that the snow was mostly still there for the next storm.  Boston did not reach the record temperature for February but it was partly because of it’s location but Worcester did.

Schools definitely had trouble that winter to open.  I remember UMASS Lowell had seven snow days that year and students including me were wondering if we would end the semester on time or even have spring break.  Many Monday classes did not have it’s first meeting for several weeks because we kept having snow days on Mondays.  Many public schools in the state also had to worry about possibly having school go into July.

The January, February and March of 2015 was a nightmare to get through, but this was a winter that is considered to be a once a century winter to happen which means we will probably never have a winter like it again in our lifetime.